A luxury Christmas cracker containing an elaborate pop-up hat, a silver prize and a joke written by a real comedian? The milliner Philip Treacy has obliged. 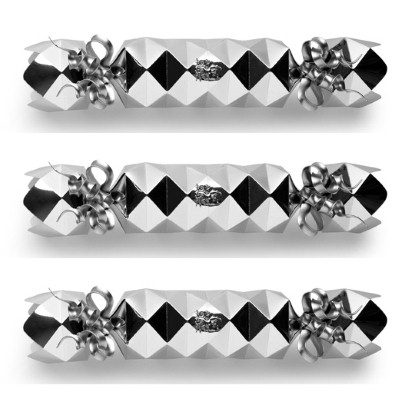 Philip Treacy has a gripe about the paper crowns found inside Christmas crackers. ‘Has anyone ever looked good in one?’ he asks. ‘They’re so sad and unflattering. That’s because it usually comes down to how cheaply they can be made.’ He goes one step further. ‘They should be banned.’

Instead, the world’s most famous milliner has decided to improve on these objects of his disdain. This year he has designed a Christmas cracker for the British luxury goods company Asprey, complete with a ‘pop-up’ hat, in a limited edition of 80.

The project has seen Treacy collaborate once again with the paper artist David Bartlett, who constructed the Neverland hat, a wearable pop-up theme park (including a mini helter-skelter, big wheel and merry-go-round), that delighted the audience at Treacy’s show during London Fashion Week in September.

For Asprey, Treacy and Bartlett have come up with a hat that was inspired by the millinery boxes stacked up in Treacy’s studio. Inside the faceted silver paper cracker the hat is folded into a bundle held together with ribbon. Once this is untied, a clever mechanism designed by Bartlett allows the hat to automatically pop up into the form of a pile of toppling hatboxes.

Philip Treacy at an exhibition of his work in Madrid in July. Photo: REX

While the cracker shell and hat are created entirely by hand, the elegant, spiralling bows at each end of the shell are produced through 3D printing. Treacy refers to this modern technology as ‘the Star Trek part’ of the design: he made one bow out of ribbon which was then scanned into a computer. Subsequent bows – exact replicas – were then ‘printed out’ by a machine that lays down successive layers of liquid resin which build up into the shape of the original bow.

Each cracker costs £1,500. ‘It’s a fortune,’ Treacy admits. ‘But this is extreme luxury.’ As well as the pop-up hat, each cracker contains a sterling silver thimble engraved with Treacy’s signature. The thimble is one of the tools of the milliner’s trade. ‘I use a thimble every day,’ Treacy says. ‘I feel underdressed when I don’t have one on. It’s like a comfort blanket to me.’

Like any Christmas cracker this one contains a joke – one that Treacy promises is genuinely funny. That is because it has been written by David Walliams. ‘I’ve met him a few times and I made a hat for his wife, Lara Stone, to wear at Ascot this year,’ Treacy says. ‘I asked him then to give me a joke for the cracker and he did.’

Star-shaped psychedelic confetti will burst from the crackers when pulled, and of the 80, one will contain a winning silver ticket. ‘That’s the most exciting part,’ Treacy says. ‘The prize is to have a bespoke hat made by me.’